Stardate: 2nd December – 2015
Alright!
As many would know, for years I’ve hosted free (monthly) online fitness challenges. True to form, I’m hosting one for Christmas… to help negate the weight-gain inherent to the season.
What many don’t realise, is that I actually participate in these challenges as well. I do so, whilst maintaining my usual workouts… as a form of support. And, yes… I struggle. Some days, I struggle BAD! Today was one such day.
Here goes!

Prologue: ‎Missed the 1st day of my challenge… so I needed to combine days 1 and 2’s workouts (plus my normal gym workout) to make up.
I was NOT looking forward to it at all.

My goals for today, not counting my usual workout:

*sighs*
Arrived at the gym 8 minutes early… figuring that’d give me a decent headstart. My training partner came 15 minutes late… giving me more of a headstart than i’d anticipated. I’m still unsure as to whether I should thank him, or tell him off.
– Jumping jacks: 100 reps

JESUS CHRIST! MY LUNGS! I’d forgotten how much these burn. This is not a good sign.

Contrary to popular belief, I suck at push-ups. I regretted every rep… unashamedly. 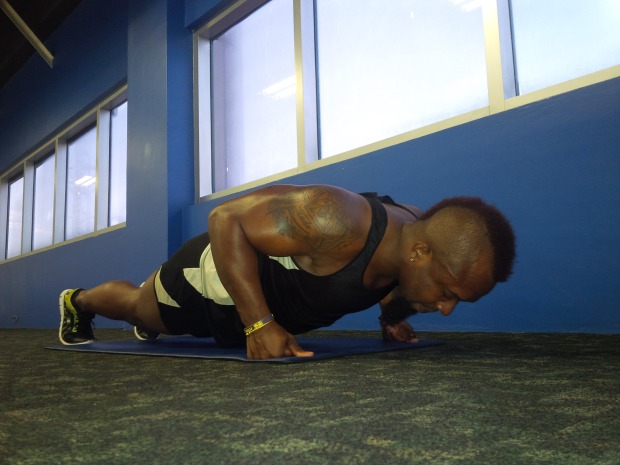 I walked past the treadmill, and swore I observed a woman watching hardcore black pornographer. Either i’m in the wrong place, or burpees have left me delusional.

I swear I must be the only person in existence that likes this exercise. My legs are wobbly. My eyes are blurry. My lungs feel like i’ve been holding my breath underwater… under burning water… with mortar shells whizzing past me… whilst carrying full tactical gear.

But… HOLY SHIT, do I ever love it.

Today, I experimented with several variations: those with forward jumps, backward broad jumps, overhead clapping, lateral hops, behind-the-back clapping. I’m not sure if this was self love or abuse… but it happened.

Dear Lord, did it ever happen!

I like to train calves when i’m fresh, so I can dedicate a tonne of energy to developing large ones. Today though, no such luck. Everything from burpees onward has been a struggle. 🙂

My hamstrings are on fire. There must be a law against this. I’d call the police myself, but I’m too pretty for prison.

Decided to cut back on the poundage today. I *may* be a bit light-headed 🙂

Managed to knock off a 2-minute set, and three one-minute sets. My shoulders were DONE at this point.
Mind you: My legs are fine… But i’m horribly nauseous by now.
Job well-done methinks.

I mean… look at this face! 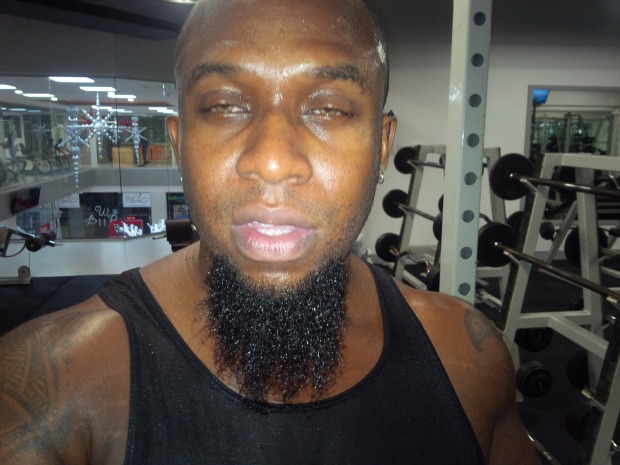 Ok, ok… maybe that should read: “Got 20 minutes, a lack of fear, a vomit bag, a box of tissue for your tears, 2 spare t-shirts, and maybe a change of underwear? Well… yea… I can give you abs.”

I’ve heard the complaints of the masses:

Today, I’ll let you in on a secret: None of my clients have time for those concerns. None of them are applicable. Each of my clients works in a Type-A-primed, 8am-til-whenever, kind of environment. We neither have time to waste, nor any to spare for boredom.

We aint got time for boredom!

Here’s how we approach fat-loss:

Kristin is a lawyer, and competitive olympic lifter, who hasn’t exercised in 8 months… due to a rough pregnancy. This is her 3rd week back with me…having been cleared to exercise just days prior. The first two weeks were mobility, skill tweaking, and conditioning. As a new mother, her time is very, very limited… as I’m sure you all can appreciate.

Kirk is an accountant who, one year ago, had a 40 inch waist and zero mobility. After reaching his fat-loss goals with me, his work schedule intensified. So, we’ve had to find ways to use the limited time we have effectively.

Liam works in a quality control setting. That means long hours on his feet, and very odd shifts. Like Kirk, his time is limited. Unlike many others on my roster, Liam sometimes exercises with me in a sleep-deprived state. So our sessions have been optimised to accommodate such..

Shane is a lawyer. His client load sometimes leads to him getting to his personal training sessions late. Optimising that limited time sometimes means scrapping the plan for the day, and compiling a conditioning workout as laid out above.

Putting Together a 20 minute Routine For Yourself:

Just how do we go about that? Easy

p.s.
I’m sure you’re wondering what my OWN conditioning workout looks like… so I’ll share it–> How I approach my own conditioning. 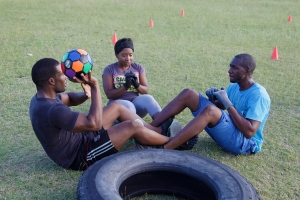 So… as many of you would know, I operate some pretty brain-bending bootcamp classes. We get clients from all over the world; from all age groups and interests. It’s fun. It’s hard. But, did I mention, how fun it is?

Before we get side tracked with the fun element, let me slip in a disclaimer:

Bootcamp is HARD. Yes, there are multiple levels of difficulty with each of my classes. Yes, there are multiple variations of each exercise, to accommodate (basically) all levels of fitness and/or injury. BUT… it. is. hard! Make no mistake about it. Often (- and because we don’t mask the difficulty in our pictures and videos on social media), people shy away from trying it for the first time, because ‘it looks too hard’.

So how do you decide if bootcamp training is right for you? Let’s find out!

Don’t take my word for it though.

Here are a few videos from ours.

I challenge you to be successful.

Why everyone should own a treadmill!
by Corey Springer

Hey guys… Here we are, at the end of another year. We had a great run didn’t we? It’ll be Christmas in a short while and, as I was making out my own Christmas wish list, I thought I’d make a suggestion for the ultimate stocking stuffer: A treadmill.

You heard right. I’m going to get myself one… and I think you should as well. 🙂

We’ve discussed the benefits of cardio to great lengths. Still, I know most of you blanch at the thought of waking up at an ungodly hour to road-walk or hit the gym for

cardio. There must be a solution though… right?

I think having a piece of equipment at home is vital. But, let’s talk about the options for a minute:

Treadmills happen to be cost-effective, stable, easy to use, and especially safe for beginners. I mean, what could be more natural than walking?

4 reasons why I think everyone should have a treadmill:

1. You don’t have to worry about getting wet.

It also means having to deal with uneven gradients, too-hard surfaces, and sometimes wet and slippery surfaces.

2. You can control the pace

…and you can push yourself a bit harder than you would if you were on the road by yourself.

Admit it: How many times have you been out on the road literally dragging your feet behind you? For me, I’ve lost count of the number of times.

Truth-be-told, if I don’t have a running partner with me, my ‘run’ looks more like a jog. That’s the honest-to-God truth! On a treadmill however, you can’t automatically slow down when you get tired. The automated pace requires that you keep up… thus taking the work-out to a higher level of intensity.

And while we’re on the topic of intensity:

3. You have control over the level of intensity

“Up the incline!”
“Up the speed dammit!”
“Set it to a random program!”

Sorry… the cardio-addict in me came to the surface for a minute. 🙂

There are multiple ways via which the intensity of a work-out on the treadmill can be manipulated. Personally, I like to mess around with the inclines. I’ve found that higher inclines really target the butt and hamstrings (which, incidentally, are problem areas for most people)… Also, I’ve found lower inclines, coupled with longer strides, great for the muscles of the core.

Additionally, most treadmills offer you the option of programming in a pre-set work-out. These programs are great for interval training (and fat-burning)… Another benefit is that they allow for a warm-up and warm-down period, thus preventing injury.

And while we’re on the topic of injury prevention:

4. You can prevent injuries

As previously mentioned, running outdoors means exposing oneself to uneven, and overly hard terrain. These conditions frequently hasten wear and tear of the joints. But that’s not all. Running outdoors also usually means dodging obstacles like potholes. The spontaneous changes in gait and other adaptations made to prevent falling are out of question for people who already have joint/motility issues… and also for the overweight.

On the flip side, the treadmill’s surface tends to be even… and a number of them are padded, thus reducing stress on the knees and ankles even further.

I mean really… what are you waiting for?